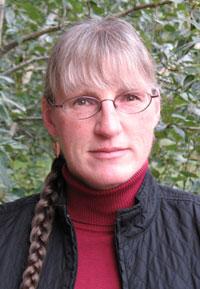 Lorrina Mitchell returned to the retail sector in 2005, having been in retail management in her early career, and then running her own business during the interim.

She worked three years as the night shift price checker for Superstore 1530, responsible for the pricing and ordering integrity of the grocery department, and became the Chief Shop Steward for the 200+/- employees in January of 2006.

Teamsters Local 31 sent Lorrina to the CLC Winter School in 2007, where she took 'Facing Management', and again in 2008 to participate in Human Rights - Issues and Advocacy, both courses of immense value in her workplace.

Billing herself as a 'Corporate Resource', Lorrina left Superstore 1530 on July 31st, 2008, and walked into Extra Foods 8567 the following day, another Loblaw's venue, to undertake the same mission as night shift price checker. Four months later, she added one night per week at Superstore 1530, working as a trainer and price analyst trouble-shooter, returning also to her Steward position.

Lorrina will be in our Whitehorse Office part-time, maintaining and promoting the strong presence of Teamsters Local 31 in the Yukon.